Home    Index to Note Cards    About the Author    Contact the Author

Richard is retired from his vocation as a college physics professor who has also taught some computer science and chemistry, but he is still very active in his avocations as a ordained Christian minister (with the Virgiinia Conference of Mennonite Church USA), a photographer, an author, and an artist-illustrator. For more complete details of Richard's professional life, read his résumé described below. 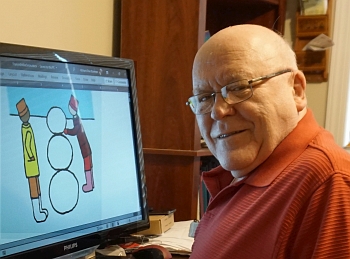 Richard and his wife, Elsie, have been married for more than 50 years. They have four adult children; each is married and with their own children Their 10 grandchildren range in age from kindergarten to colleg Over the years these relationships have given Richard rich opportunities to share science demonstratons in many elementary school settings and to share his Christian faith with children and youth.

In his ministerial role, Richard was licensed and later ordained as a Christian pastor and orverseer/bishop/district minister. During his 50+ years of adult life, Richard has formally served eight congregations in pastoral or overseeer roles for more than 20 years. Elsie and Richard have responded positively to God's call into these times of formal ministry as churches and mission boards requested their service. And as they describe it, "We have tried to live every day as God's people, knowing that we are finite and thus fallible, but also knowing that God forgives and offers mercy and grace and that the Spirit of God lives with his children."

After meeting in college (Elsie was from Oregon, USA, and Richard was from Pennsylvania, USA) and discovering their love for each other, they were married in 11970 after Richard graduated from college. For the next threee years, they lived and worked in Belize (then known as British Honduras). Richard pastored a church plant, an evangelical Mennonite congregation in Belize City, and taught physics and math for one semester in the local government high school. After they retied from physics teaching and serving as a registered nurse and diabetes educatior, they served and lived in Albania for two and a half years. In Lezhë, Albania, they worked at a local high school and with the leadership of a growing Mennonite congregation.

As they now live in a retirement community in Harrisonburg, VA, USA, Elsie and Richard enjoy time together, reading and writing, and getting to know their many neighbors. Richard also has enjoyed working alongside of fellow resident Roman Miller in beginning, organizing, and leading Elder Exchange. The Elder Exchange is "a monthly academic forum discussing issues of faith and life."

You can also scan the complete online résumé for Dr. Richard L. Bowman, retired physics professor (including professional and avocational information), or save it as a pdf file for later perusal.